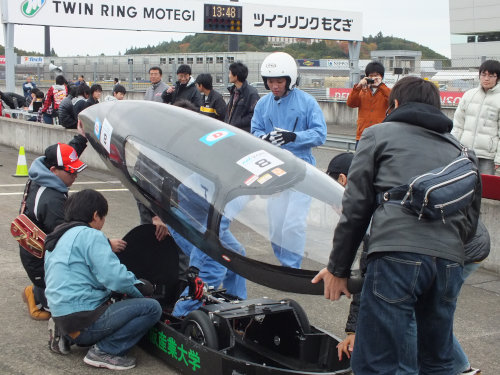 Yesterday, I posted an update on the origins of the Eco Racer, and how I found out that my car might have been the same car Osaka Sangyo University built to race in the ENE-1 GP! I’m super excited to find the heritage of this machine! But, after doing some more research, I’m starting to think this might not be the same car at all. In fact, I think it’s something even more special. Is the Eco Racer a prototype?

The image above was the biggest clue to the true origin of the Eco Racer. While all the cars that raced in the ENE-1 GP’s KV-1 class are similar to this one, this car and the car I have are a little different. Although both of the cars look exactly the same, the canopy in this car is a one-piece canopy. However, the canopy used in my car ends at the bulkhead for the engine compartment. The tail section is also it’s own separate piece.

Also, if you look closely at the racer in the 2013 picture, some of the internal structures are different. In my car, the steering linkages are placed lower than the top of the front wheels. In the pic from 2013, the linkages are higher than the tops of the wheels. The linkage geometry is also different.

The placement of the steering linkages in the 2013 picture looks like it could be a revision of the system from my car. The higher placement would make for a little more legroom, and it could also affect steering. With this and the one piece canopy in mind, you can see the difference between my car and the race car in this video from the 2014 ENE-1 GP at 12:58 and 22:10:

Other than these glaring differences, both cars are extremely similar in design. In fact, I believe the bodies could have been pulled from the same mold. Which begs the question:

What exactly do I have?

There are two possible answers for the true origins of my car. The first answer is the most obvious: I have a proof-of-concept prototype that was tested and evaluated before the actual race car was built. In other words, I have the test mule for the ENE-1 GP racer, and not the actual car. While this is disappointing, it is also very intriguing. In most cases, prototypes like this are either destroyed or kept in a museum or private collection. Seeing as this car was kept by a private individual, this could very well be the case!

The second possibility is more exciting. In my last post I mentioned that I had possible video evidence of the car taken during the commemorative photo session for the inaugural ENE-1 GP in 2011. I found more videos of an extremely similar looking car at 04:28 thanks to the same source!:

The video in question shows the 1st Attack session for the KV-40 Class at the 2011 ENE-1 GP. In the timestamp above, a car with the same exact shape of the OSU car can be seen in still images, with less markings on the body than the later cars. Unfortunately I can’t find much else on the 2011 ENE-1 GP or this car. Could it be possible that this is my car? Do I actually have the KV-40 car from the 2011 ENE-1 GP? Who knows?

The likeliest scenario…and some answers

In all likelihood, I have a very early version of the KV-40 race car for testing purposes. A prototype for a prototype even. This corroborates the story I’ve been told so far, since the original owner stated that the car was built as early as 2009. As I look further into the details, more questions are being raised. If this is the prototype for the KV-40 car, then where are the records for it? Shouldn’t there be some documentation somewhere showing how this car was built?

Suffice to say, it looks like this mystery isn’t solved at all. However, I am extremely close to solving it! I now know that this car and its possible sister car was built for the KV-40 class. This class was unique, as it was sponsored by Panasonic and the cars used a 40 AA battery rechargeable power cell. According to this new research, this car was competing in this class and not the KV-1 class I thought earlier. This also could explain why the battery pack was replaced with two 18-volt scooter batteries. Perhaps the original battery pack was taken out of this car and put into the racer?

Before writing this post, I actually managed to write an inquiry to Osaka Sangyo University (see my Instagram) requesting verification of what I had. Of course when I wrote it, I believed I had the actual racer and not a possible prototype. Either way, I hope that my inquiry will be answered as I could finally have the final word on what I actually have!

But, there is also the possibility that I may not get an answer at all. Whatever happens, I’m still very certain that Osaka Sangyo University did build this car! I just have to wait and see!

One thought on “UPDATE: Is the Eco Racer a prototype?”