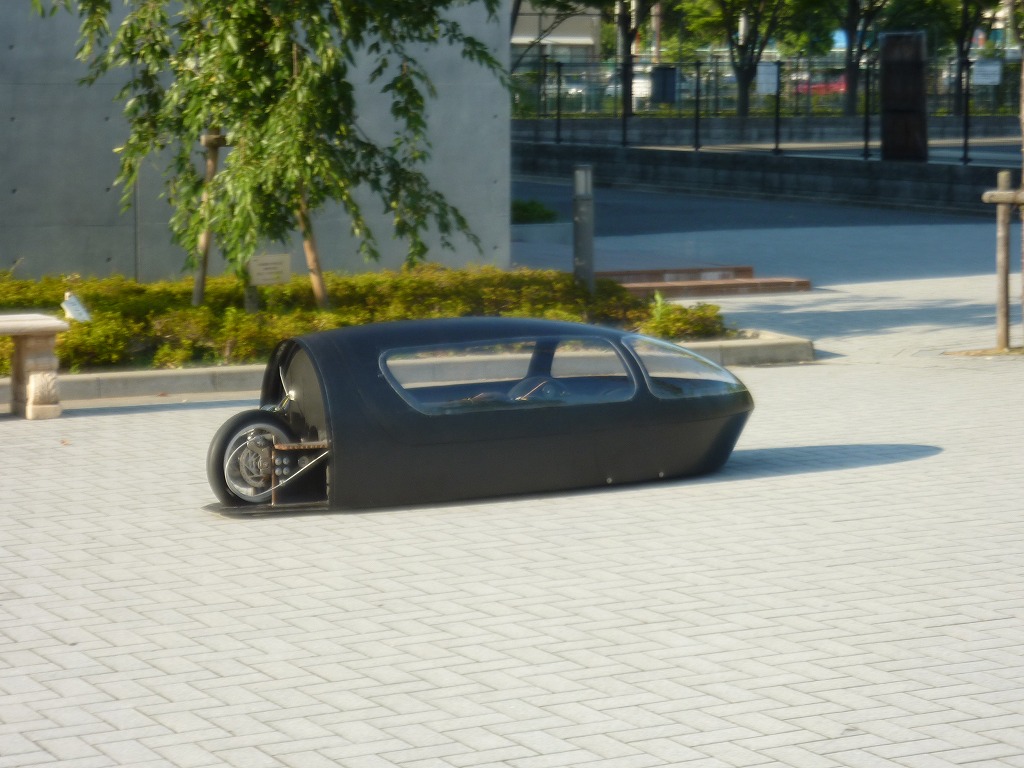 Takashi Sudo went on to explain that he was the person who helped design and manufacture my car. He participated in the ENE-1 GP, and can be seen in the photos I shared working on the ENE-1 GP car at Twin Ring Motegi. In my last email exchange, he stated he was currently making a smaller car to compete in the next ENE-1 GP.

Here is the original email in its entirety below:

Nice to meet you. This is Takashi Sudo.
At that time, I designed and manufactured the car in the photo at Osaka
Sangyo University.
sorry. Since I am using translation software, the text may be strange.

Thank you for researching the cars we made.
This car was specially designed for students who came to an internship
from Stanford University in 2009 to learn about CFRP in a group called
New Energy Vehicle Project, Osaka Sangyo University when I was just a
teacher at that time. ..

At first I participated in the battery competition Ene-1GP to compete
for the ranking, but it is so big for us to ride, so now I am making a
small car and participating, and now I am a driver I am participating as
a practice car. There used to be a lot of photos, but my computer broke and there are almost no photos left. sorry

For inquiries about electric vehicles
Also, when I was a student, I made and rode an Oxyride Battery Vehicle.
Now that I’m away from my teacher’s job and working as a clerk at Osaka
Sangyo University, it’s difficult to make a new car, but I’ll be
participating in the 2021 Ene-1GP!

I couldn’t believe it! Here was definitive proof of the history of the car straight from the source! But, I still had a lot of questions. If my car was the sister car to the ENE-1 GP racer, then why were there differences in the canopy design and the steering system? Also, I wanted to know if my car raced as the previous owners once stated, and what was used for the original power source. I wrote another email to Takashi Sudo (with translation from English to Japanese) with the hopes of gaining a clearer insight into my car.

Takashi Sudo replied to my second email and provided much needed insight into the design of my car. Originally, the OSU car was developed for a race series called the “World Econo Move GP”; a race series similar to the ENE-1 GP in which electric cars powered by 2-4 motorcycle batteries competed for endurance. According to Takashi Sudo, the first race the car attended was at the Eco Car Festa 2009 for the 4th round of the 2009 World Econo Move GP. From what I was able to gather, this race was held at Sportsland Ikoma between September 22nd and 23rd. Unfortunately, I couldn’t find pictures of the car at the race, but did find a photo of the participants of the race, as well as the practice, qualifying, and race results. The OSU race car was listed as car No.9 “Super-Sanda”, and placed 10th overall with 47 laps completed!

Takashi Sudo went on to explain that while the OSU “Super-Sanda” was designed for the World Econo Move GP, its sister car was the car developed at the same time by the student intern team from Stanford University. The Stanford car was designed and built using the same molds that were used for the Super-Sanda, but with slight differences in its construction that set it apart from the original car. So why were there differences in the design of the Stanford car and the Super-Sanda?

Takashi Sudo explained in his email that the he had designed and built both cars in the same shape in order to make the manufacturing process more simple. Both cars were actually completed at the same time, but, Takashi Sudo and the students decided to utilize different concepts for each car. For easier clarification, I’ll be referring to The Stanford University Car as #1, and the OSU Car as #2.

The most notable difference between the cars were the design of the canopies and bulkheads. #1 utilizes a two-piece canopy and tail cowl, whereas #2 uses