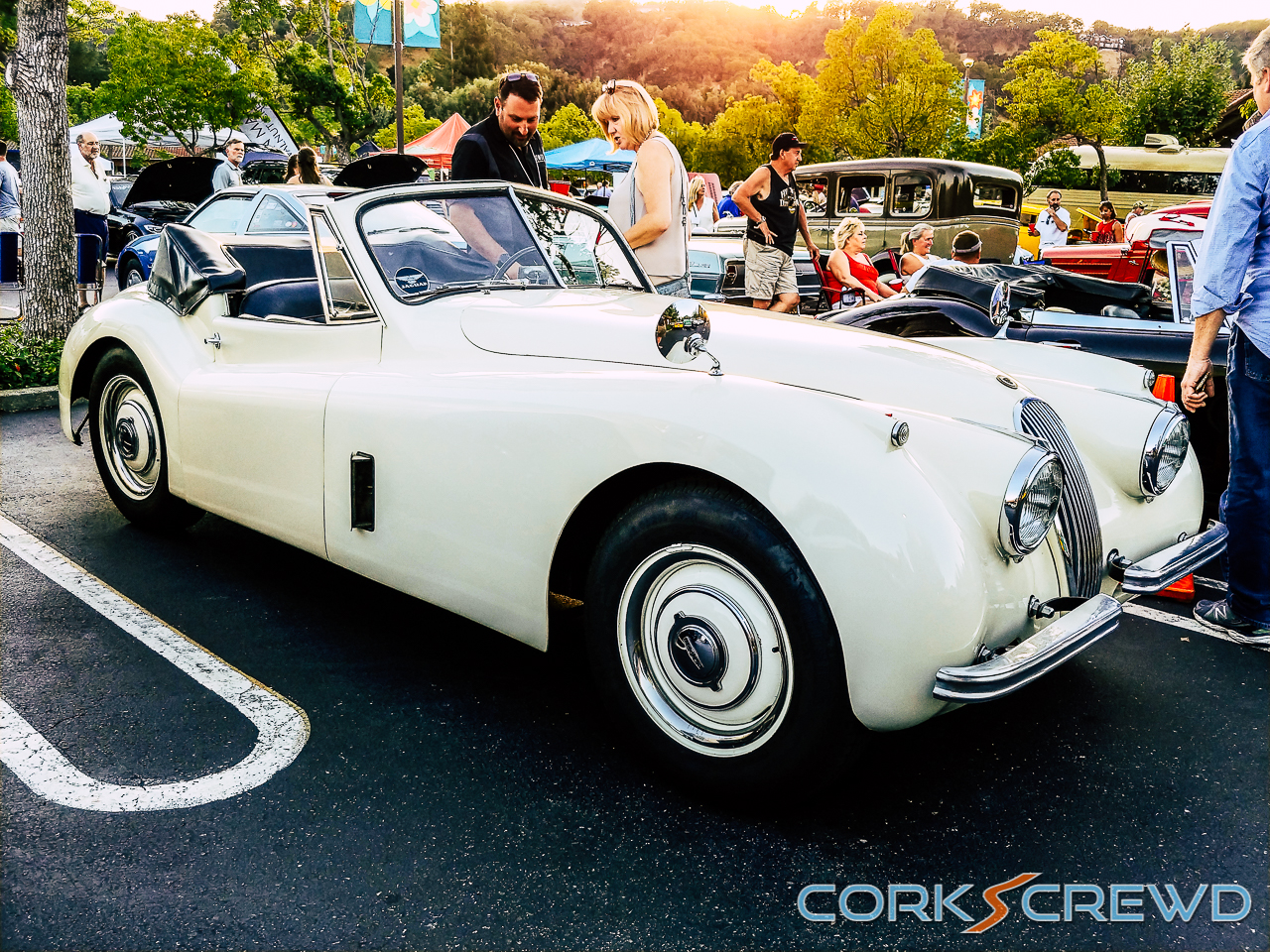 I’m a believer in expertise. I think that regardless of the toolset you use if you have a deep understanding of the processes and techniques used in photography, you can still create stunning photos. It’s not about how good the camera and lenses are, but how good the eyes behind the viewfinder are.

But, could I shoot an event with just a phone? I decided to give it a try!

Caught without a camera

One late summer evening, my friend let me know that there was a small classic car show happening nearby. This was a few days after our conversation, and just after a major event. My camera was basically out of commission as none of the batteries were charged and I still needed to offload photos. Then I thought, “Wait, this could be a chance to test what my phone can do!” This was a chance to test my hypothesis. I grabbed my phone and ran out of the door.

My phone of choice is the LG V30. Back in 2017, the V30 featured one of the best (if not the best) built-in cameras in a field that included the iPhone X and the Samsung S8. I decided to get the V30 because of the camera and its ability to shoot in RAW format. I was always curious if I could get away with using just my phone, so I was excited to finally put the phone to the test of capturing a local car show, in less than ideal lighting conditions.

Leveraging the phone’s ability to shoot in both RAW and JPG, as well as the ability to modify the viewscreen to show professional-style tools (view grids, histograms, white balance, etc.), I got to work. I utilized all of my regular techniques; like dropping close to the floor for close up shots, pulling in really close for macro photography, and then using the view grid for shot composition. I used my phone as if it was a DSLR camera to make sure I can accurately compare the photo quality to using a DSLR rig.

The results were pretty surprising:

Is the best camera is the one you always have with you?

After processing the photos and making my regular tweaks in Lightroom, the quality of the photos was very surprising! While some images weren’t quite as sharp as I wanted, the majority of my photos were almost indistinguishable from photos shot with a professional photography rig. I think my phone performed better under certain conditions than my camera! So, you can professionally shoot an event with your phone.

This, however, begs the question: should I rely more on my phone camera than my rig? I think the answer is both yes and no. While your phone is an extremely powerful tool that not only allows you to take photos, edit them, and upload them to a microblogging platform, it shouldn’t outright replace your camera and lenses, because a phone camera is more limited in its capabilities. I can’t take my phone behind the fences at Laguna Seca and expect the photos to look the same, can I?

I think the best approach is to use both your camera and your phone in tandem. I’ve often used my phone to shoot photos for my Instagram and used the photos from my camera for my blog. The most recent example of this was when I went to Laguna Seca for the 30th Anniversary Miata Reunion; where the photos from driving on the track were from my phone whereas the gallery photos were from the camera.

In the end, I think the question of shooting events with your smartphone boils down to your skill. There is nothing wrong in my opinion with using your phone as a professional camera for Instagram or blogging. There are set limitations for what a phone camera could do. This is where a dedicated camera will outperform a phone camera.

Until someone makes a phone with interchangeable lenses, I’ll continue using both my phone and my camera. Though, It’s nice to know that I can sometimes leave my camera at home!

Monterey Car Week is only a few days away!

I realized this as I returned from my week hiatus. So, naturally, I decided to start preparing my camera equipment and set about reviewing my Lightroom settings. It’s then that realized that my main Hard Drive was slowly running out of space. I have a massive 3 Terabyte Hard Drive I added when I first built my computer as a gaming rig in 2014. Now, only 500 Gigabytes were left. Because I shoot in RAW, I needed to find a way to free up space in my hard drive before the weekend! That’s when I had the idea of cleaning the Lightroom Library to see how much space my junked photos were taking up!

You don’t have to keep everything

When I first started cleaning my Lightroom library, I was apprehensive about getting rid of some photos. After all, I’ve got some great photos over the years and I can’t always publish all of them. But, the truth is that I haven’t revisited most of those photos AFTER I already published my favorites. It didn’t make sense to keep unpublished photos 2-3 years after the fact. Plus, the majority of those photos I skipped over because they were either a duplicate or they were throaways. So, I decided to take some of the Konmari method and start deleting old, unused, and rejected photos.

I’m not even halfway through the process of deleting the old photos, and I’ve noticed exactly how much space these unused and unpublished photos were taking up: When I started, I had about 500GB left on my 3TB Hard Drive. Now, I’ve got about 850GB free! I wouldn’t be surprised if I ended up clearing out another 500GB.

Clean your Lightroom Library! You have no idea how much space is wasted when you keep rejected or unmarked photos. If you’re not going to use it, it’s better off in the Recycle Bin.

Just don’t forget to clear that out too.

At first you don’t succeed…

In one of my recent posts, I wrote about how sometimes buying a pre-made aftermarket part is a lot less of a pain than taking on a DIY car modification project. I had tried to take a surplus aluminum industrial knob and then adapt it to my car’s shifter for a fashionable, DIY shifter knob.

Unfortunately, I made some mistakes in the small project that basically ruined the knob, and I was forced to concede that it might have been easier to just buy aftermarket. Had I been a little more careful, I wouldn’t have ruined my project.

Well, after posting this story on Oppositelock, the community jumped onto the post and the comments started flying. Each commenter had an idea on how I could salvage the project and offered me encouragement to continue the project. One even suggested that I was lucky because it was “an inexpensive lesson.”

Thanks to that community and their ideas, I regained my confidence and decided to try again!

I had several options laid out to me. First, was the relatively simple method of filling the bore with JB Weld and letting it harden overnight. When it was hardened, I could take the correct-size drill bit and then drill another hole. Then, I would re-tap the hole with the thread tapping tool and voila; knob fixed! The only issue would have been making sure that the plug stayed in place during drilling, and making sure that the drill was perfectly center on the plug.

Second, I could buy some Helicoil and re-thread the hole to the needed thread size and pitch. This would have been much simpler than the JB Weld method, but I would need to buy a specialized toolset in order to do it. Seeing as the needed coil was just part of a standard toolset, I wasn’t about to shell out more money for something I was going to use only once or twice.

The third option was the simplest option: just but another knob and try again. The knobs themselves weren’t that expensive. Plus, they were less expensive than the other two options. So, I ended up just buying another knob to try again.

Patience is a virtue

When the new knob arrived, I was ready. I had already gone to my local hardware store to exchange the drill bit I was sold. Luckily for me, they were more than willing to take the old bit back and give me the correct size! I had set up the workspace and made sure there were no shavings from the last attempt to mar the finish on the new knob. Also, I had slipped on some covered for the vice I was using so that it wouldn’t damage the knob.

Then, I got to work. The used the new drill bit and bored out the old threading from the knob, backing out every now and again being careful not to let the drill catch. The drill only caught once or twice, but thanks to the covers over the vice, there was no damage done to the knob when it decided to “walk.” It was slow and painstaking, but I managed to pull off drilling everything out!

Lastly, I took the thread tapping tool and gently threaded the fresh bore inside the knob. This part took even longer because I didn’t want to accidentally cross-thread the bore. My patience paid off though: I successfully re-threaded the knob!

Now, was the moment of truth. I practically ran toward my car and threw the door open. I swiftly unscrewed the old shifter knob and threw it into my glove box. Then, I held my breath and gently screwed the aluminum knob onto the stick.

I finished screwing the knob and then stepped back to admire the work. It was then that I noticed that the new shifter knob accidentally matched with the chrome rollbar that came with the vehicle. At first glance, it looked like the knob was meant to be there! Ecstatic, I hastily put my tools away and went for a spirited drive through some of the country roads nearby to test the new knob.

I have to say, shifting is a joy with this car now with the new aluminum knob! Also, even at 100 degree days, the knob tends to stay cool so long as I park in the shade!

After my first attempt, I gave up a little too easily. I blame it on being frustrated that “my brilliant plan” didn’t work out the first time around. But, making mistakes is a great teaching tool. I had learned that if I took a step back and realized what went wrong, I would have the knowledge to succeed the next time around. All I needed was the encouragement from more knowledgeable people to try again.

So thanks Oppo! I’m enjoying my new shifter knob now!