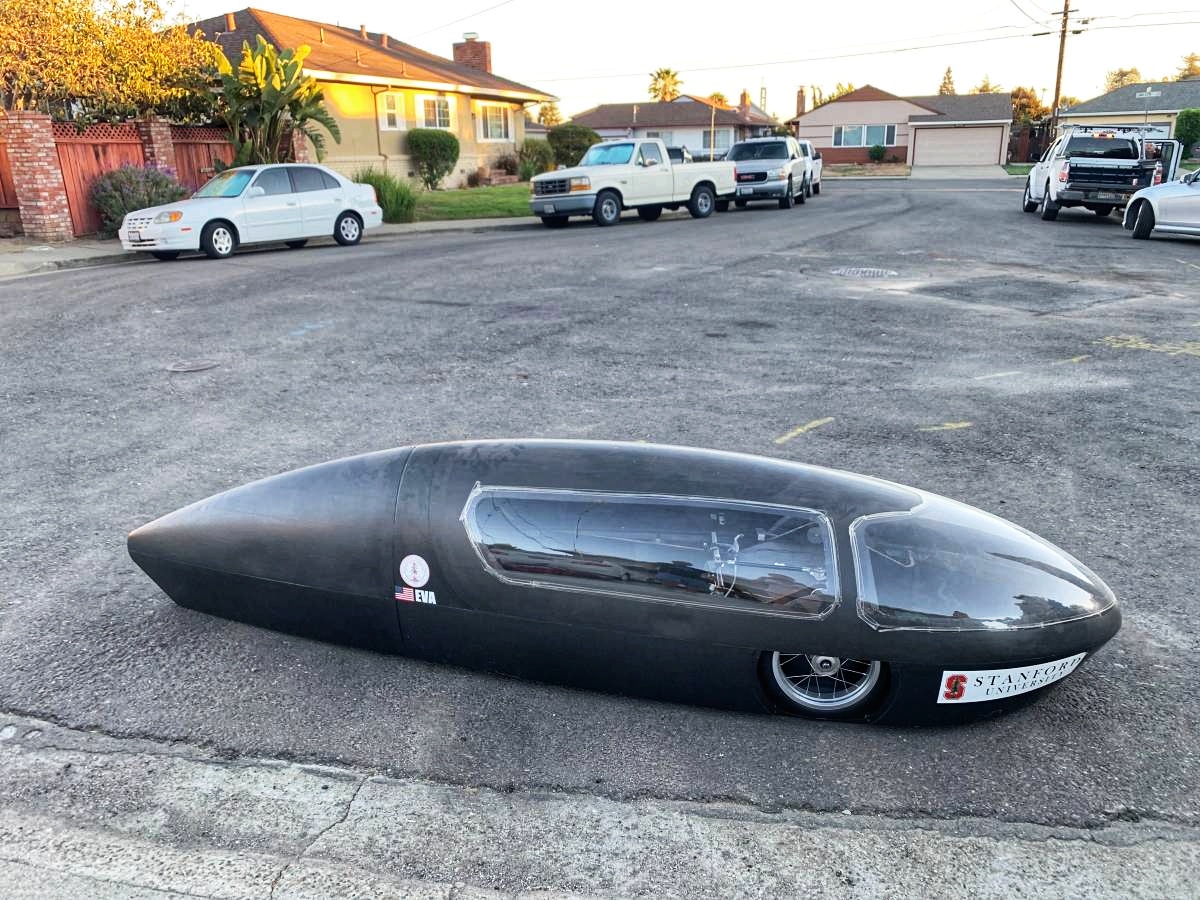 So, despite everything that’s been going on in the world, there is at least one silver lining. People are selling just about anything on Craigslist for some quick cash! There are some interesting deals out there, and by extension, there are some interesting cars on sale. And sometimes, someone is selling an Eco-Racer in the next neighborhood over.

I should probably explain that I didn’t go out there looking for something. In between work, school, and the existential dread of living in a post-capitalist dystopian nightmare other things, I’m just too busy to take on yet another project.

That changed when my mentor sent me a picture of this:

A local Craigslist ad for a “Electric Prototype Vehicle” hidden in the “ATV-Motorcycles” section, with this photo. Most people looking at this thing would probably have dismissed it as someone’s backyard project vehicle. But of course, I knew better.

This wasn’t some backyard go-kart build. This actually is a prototype “high-efficiency” racer in the same vein as a Shell Eco-Challenge racer!

What is an Eco-Racer?

Usually, these vehicles have a compact powerplant designed to consume 1 liter per 100 miles, or 235MPG! But, electric and even solar-powered racers are common too. These vehicles aren’t necessarily fast, but they’re so small and low, driving them must be a lot of fun!

The funny thing is, I’ve had an obsession with designing and building something like this as a school project. And here was one on sale in our own neighborhood.

I think you can see where this is going.

After chatting with my mentor about the listing, I decided to send the seller a message. A short while later, we got into contact. After asking a few questions and learning more about the vehicle, we made plans to meet.

The next morning, we hopped on over and got a good look at this eco-racer. I was amazed at the construction of it! The monocoque is made from cardboard honeycomb sandwiched in carbon fiber, and the cowlings are made from a single sheet of carbon fiber. Even the controls are carbon fiber! The end result is a superlight torpedo of a vehicle! I was so amazed by this thing, I had to know exactly where it came from.

Apparently, this eco-racer belonged to the seller’s sister-in-law. She was a Stanford Mathematician who in the Summer of 2009 traveled to Osaka Sangyo University to assist a student team in designing and building this eco-racer for some inter-university competition. Osaka Sangyo is famous for designing and building highly efficient, record-breaking electric cars and solar-powered vehicles!

The eco-racer that was now sitting in front of me apparently came from an institution with a racing pedigree. Sadly, this was all I was able to find out about the racer from my initial meeting with the seller. Could it be possible that the same minds that built these record-breaking cars from a decade ago built this thing?

After the competition ended and the sister-in-law flew home, the eco-racer showed up on their doorstep some time later. As thanks for her help with the project, Osaka Sangyo University had sent the entire vehicle to her home and paid for all the shipping! From there, she kept in the garage and eventually gave it to her brother-in-law to tinker with. And now, he wanted to give it a new home.

So, I pulled the trigger.

After paying the seller and convincing a skeptical, but intrigued friend to borrow his time and his truck to haul this thing home, we unloaded it and took a good look at its construction. With the cowlings and the wheel covers taken off, its pretty clear how extensive the cardboard honeycomb and carbon fiber construction is! There doesn’t seem to be any internal framing except for the brackets holding the motor and rear wheel assembly in place. Even the upper surface the controls are built on the same cardboard-carbon fiber composite as the belly of the racer.

As advanced as the monocoque and cowlings are, the powertrain is simple to understand and work on. Everything is made from off-the-shelf components. The wheels and tires are from a folding bicycle, and the 100W motor itself is from an electric scooter. The motor is paired with a bicycle chain and a single sprocket turning the rear wheel, and the single rear disk brake is taken from a bicycle as well. Power is provided by a pair of 18-volt scooter batteries controlled by a single toggle switch and a pulse width modulator acting as the throttle.

With this powertrain and the lightweight monocoque, this eco-racer could be capable of 20+ mph! The seller did mention however that the electronics need to be upgraded. After all, the batteries and the motor are over ten years old. Despite their age, the batteries still hold a charge, and we were able to get the eco-racer to move with my 215 pound frame wedged inside the cockpit! With some upgrades, this thing has a lot of potential!

After we were done playing with it, we buttoned up the cockpit cowling again, taped the windows up for extra security, and then lifted the entire racer onto a portable table near the back of the garage. Then we attached the rear wheel cowl with a single bolt and closed up shop. Right now the eco-racer is sitting pretty until I decide which direction I want to take with it.

Now that the Eco-Racer is safe and secure, there are a few things I need to do to it:

My hope with this new project is to have something interesting to show off once Cars and Coffee events start opening up again. This could be an interesting opportunity to advertise the Academy of Art’s Transportation Design Program too! I would love to take a crack at redesigning the cockpit cowling as well. Having this thing will be a great opportunity start learning how to fabricate with composite materials.

The possibilities are endless!

Every once in a while, I open a new tab and go to Craigslist. I’m not looking for anything in particular. I’m usually just killing time between deleting emails, blogging, and looking for gigs. But when I’m on Craigslist, I like to challenge myself with a little game: What’s the coolest thing I can find for $100?

The rules of the $100 Dollar Game are pretty simple. You just search for anything and everything in your area listed on Craigslist, priced $100 or below. It often helps to filter results based on images, and I usually sort by “Owner” instead of “Dealer” to get more relevant results. Lastly, I set the minimum price to $50 because I hate it when you find something listed for $0, only to find out that the posting is asking for a lot more than $100. You could even narrow down your results further by focusing on your area of interest

Because I live in Silicon Valley, I usually find some pretty interesting things. The quality of junk here is a lot better than most places:

This is just a small amount of the interesting things I’ve found. There’s at least 15 more pages of this stuff on Craigslist, but It’ll take me all day to sort through and post everything here.

So, what kind of cool things can you find on Craigslist for under $100?